Halloween ideas for kids, have a scary night!

The little ones in the house love parties and celebrations. That is why, of course, we parents make every effort to ensure that they enjoy all these special days to the full.

In recent years, some of them have become very popular in Spain, and this is of course the case with Halloween. In the following lines we would like to focus on it in particular, and especially on how to celebrate a Halloween for children. You will discover a few ideas to prepare a scary night with them, to have a great time! First of all, we want you to get to know the origin of this party better.

What is the origin of the Halloween party?

Before we focus on the ideas of Halloween for children, we want to explain to you what the origin of this party is. Apparently, its name comes from the phrase “All Hallows’ Eve”, which can be translated as All Hallows’ Eve. As you know, the next day, November 1st, the Catholic Church celebrates All Hallows’ Day.

Although many associate Halloween with the United States, the truth is that it is a festival of Celtic origin called Samhain, which was commemorated at the end of the summer harvest and served to mark the beginning of the new year for this culture. They also believed that on the night of 31 October the souls of the dead could return to the world. Therefore, in order not to be attacked by them and to confuse them, the living disguised themselves with terrifying clothes. They also gave them sweets to appease their anger.

As time passed, this celebration was passed from one village to another and, along the way, underwent some changes. It is not clear when it became similar to what is now known as Halloween, but it is believed to have been between the 1500s and 1800s. 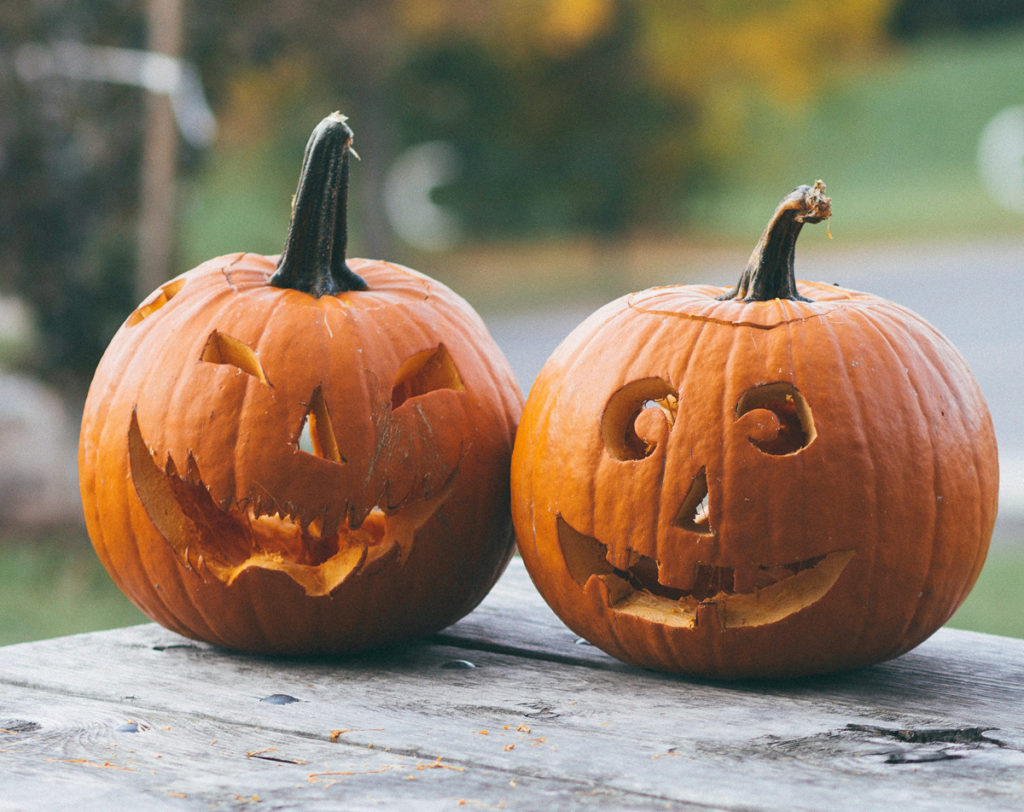 Halloween was introduced to the United States by the Irish, who in the mid-18th century migrated en masse to this country because of the Great Famine they were suffering from. Little by little new traditions were incorporated such as the pumpkin or the phrase “trick or treat”. The celebration became very popular in the American country at the end of the Second World War. As part of the American influence around the world, the festival has become popular in many countries and more and more importance is given to its celebration.

What Halloween activities for children can you organise?

The time has come to learn about some activities that we can organize to enjoy a Halloween for children. I’m sure that with these ideas you will all enjoy one of the most fun and terrifying nights of the year.

Halloween movies for kids; some scare and a lot of fun

Is there anything better than a family movie night? Get the popcorn ready, because there are lots of Halloween movies for kids. Of course, we always recommend reading reviews or watching the movie yourself before you put it on. Although many films are rated as child-friendly, only you know the sensibilities and tastes of your little ones.

By the way, if you want to accompany these films with real Halloween popcorn, just add some red colouring and you will have some real bloody popcorn.

Decorating the house, time to have fun with crafts!

It doesn’t matter if you’re not planning on having visitors or having a Halloween party. Decorating the house is a perfect plan to enjoy this day even more, to do handicrafts with the family and to entertain the little ones in a different way. Halloween decorations don’t need big budgets either and encourage creativity in children.

Spider webs, ghosts, pumpkins, spiders, bats, witches and cauldrons… there are many typical Halloween elements that you can make yourself with balloons, latex gloves, sheets, socks, cardboard and many other materials to go around the house. Don’t forget to stop by Pinterest to find plenty of inspiration.

Home decoration for Halloween is something that can’t wait for the last minute. We recommend that you plan ahead so that each member can give free rein to their imagination and work as a team. 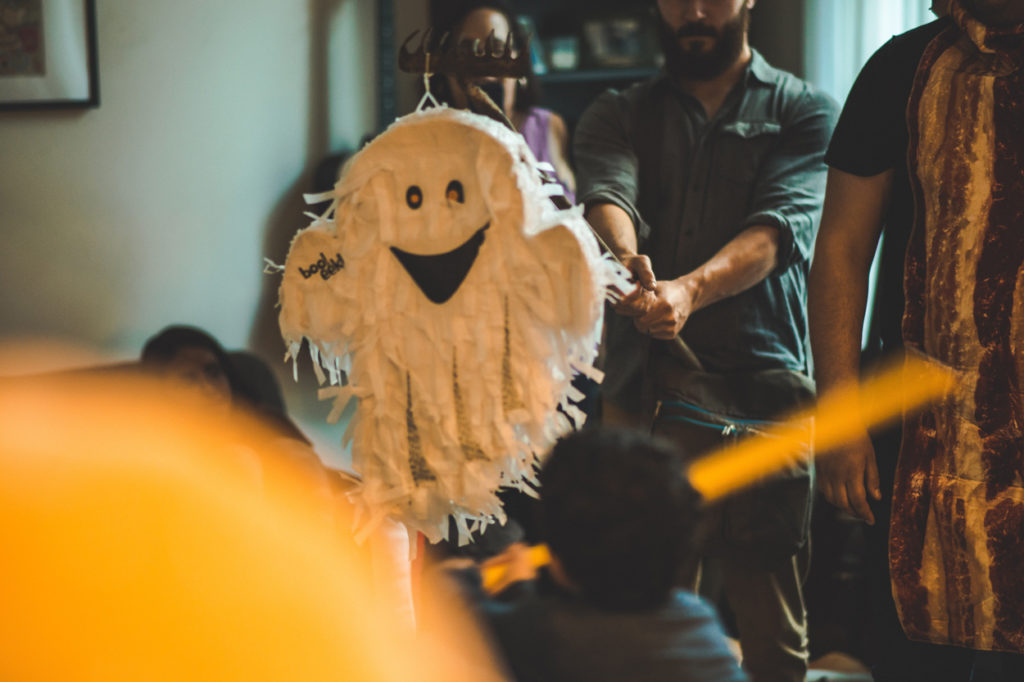 Scary stories, who will have a better story?

A round of scary stories is a good option at the end of the film or while having a snack, try not to do it just before going to sleep! Here we have several options, each participant can invent their own story, thus stimulating the imagination of the children, or look for stories to tell later as a group.

If you want, you can decorate the space where the stories will be told and, when the time comes, turn off the lights or leave some candles or torches burning.

Dressing up and being very scary is something that almost all children expect to do on Halloween. Rather than opting to buy a costume, we invite you again to let them make their own outfit. Disused clothes and a little imagination can make them surprise you with an incredible costume.

Vampires, witches, ghosts, members of the Addams family or some of their favourite characters are uncomplicated costumes that they can create themselves. And why not, what about a costume contest? If the little ones are not too small, each one can prepare their own costume and keep it as a surprise, then, you just have to vote the best one among all. Maybe the winner can choose the film to watch later!

Scares make you very hungry. Therefore, another good idea is to prepare Halloween-related recipes for dinner, snacks or as an aperitif while doing the rest of the activities. Biscuits in the shape of ghosts, mummies of sausages and puff pastry, witch hats with wafers and chocolate, snakes made of puff pastry and cheese, bread bones… There are lots of delicious recipes you can try! 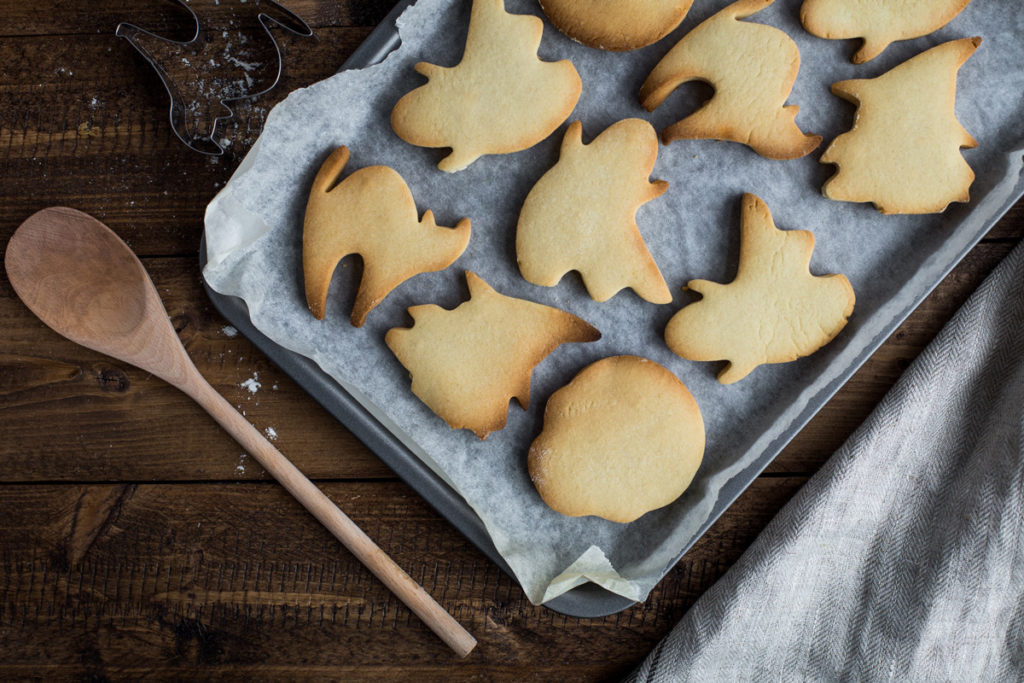 More and more families are organising a Halloween party for children, if that’s you, I’m sure all the activities you’ve seen will inspire you to have a great celebration – we hope you have a great time!